Traveler Jiří Kalát shared with us his experiences from his trip to Sweden, during which he tested our products in the harsh conditions of the north. 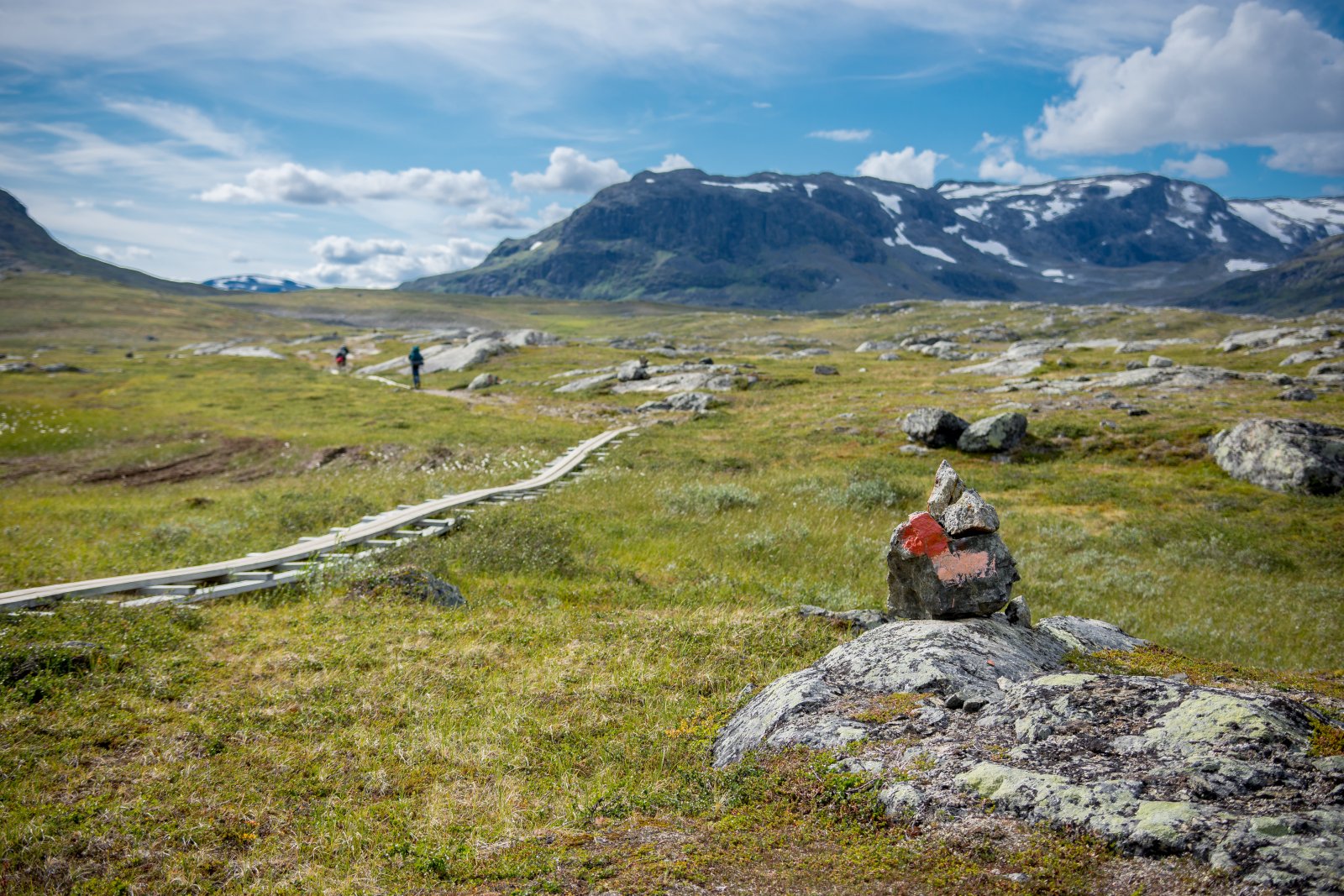 Wild Days Beyond the Arctic Circle

The fog is falling lower and lower and we are standing on top of a nameless mountain (approx. 1300m above sea level) located about 250 kilometres north of the Arctic Circle. Water swirls through the air, small drops come from almost all directions, it's not heavy rain, it's just everywhere. Suddenly, about thirty male reindeer emerge from the fog directly in front of us. They look at us in a hostile way. It's not surprising, we're off the classic routes of the Royal Trail, and these places don't get many people. They're at home here and we're the intruders. We know that there are hundreds, maybe thousands, of others around us, we have seen them on the way up the mountain in previous days. It's a magic mountain and we should go. We slowly begin to descend with careful observation from the alpha male. After a while the fog covers the herd keeper, as well as the whole mountain, and it begins to rain heavily. It was precisely after these encounters that I went to Sweden.

The Royal Trail (Kungsleden) is one of the most popular long-distance routes in Europe. Every year, thousands of people and enthusiastic outdoor lovers go there. During this year, however, the situation was different. Covid's rules have shuffled the cards for almost all travel lovers, especially the constant change and uncertainty about what is valid and what is not. Far fewer people are heading north than during the high tourist season. Ideal time to go there and enjoy a trek without people. Well, almost without people.

The entire Royal Trail is 440 kilometres long and connects Abisko in the north and Hemavan in the south. Its uniqueness is mainly due to the fact that it leads to one of the largest wilderness areas that still remain in Europe. It was built at the end of the 19th century and is maintained by the Swedish Tourist Association (Svenska Turistföreningen - STF). We only had six days in the wilderness itself, but we still had a wonderful 120 kilometres of wild landscape, mountains, rivers, rain and mosquitoes.

Our first moments at Kungsleden were not as people - free as I first imagined. Dozens of people with backpacks jumped off the train at Abisko Turiststation. Most of them, however, stayed on the spot in the camp, so it was a little more free after all. After five kilometres of walking, we pulled in and set up tents at a small campsite. The river called directly for swimming and the surrounding rapids to be photographed. The water was icy, but it was worth it.

The sun shone the next day, and one wouldn't even realise how far north they were. There is plenty of water everywhere along the way, so at least you don't have to worry too much about this. The trail is beautifully marked and you can't get lost on it if you tried. Sleeping on the shores of Lake Alisjavri was romantic and the fights with the local mosquitoes were an adventure in itself, what more, could I wish for.

The next day we managed to reach the highest point of Kungsleden, which is the saddle of Tjäkta (1150m above sea level), beautiful views of the surroundings forced us to break up the tent camp just a short distance below the saddle. Our reward was a visit from a small reindeer herd just hanging around.

One of the highlights of our journey was to the ascent to the highest mountain in Sweden called Kebnekaise (2097m above sea level). The day we were supposed to try to climb into the camp below the summit, it started to rain incredibly. The weather continued to worsen, yet in the wind and rain I set off on a steep path around a small river, the others following me from the very beginning. It slid terribly on the rocks and the trail was not the safest. I tried to ascend as high as possible with the vision of a cabin where we could warm up. About 200 metres from the catch up point, Pavel caught up with me, saying that there was no point in rushing up, because the group decided to camp below and wait until morning. I wondered for a while if I should go on alone, but common sense was on the side of my friends.

The next day the weather improved a bit, it stopped raining, but the clouds were still low. Nobody wanted to go to the top, nothing would be seen anyway. So we chose an alternative ascent to "Reindeer Mountain" and as I wrote in the introduction, it was definitely worth it. You just can't always get what you want and climb a mountain just to tick off another peak, I really don't want to do this. Maybe next time.

The last kilometres of our trek were carried on in the name of fighting the rain, and when it was not raining, we were in a futile duel with the local mosquitoes. They were everywhere, and the only reliable protection was smoke or a net on the face. Evenings were not pleasant with either of them. The rain was much better than the mosquitoes. One can prepare for falling water and with quality clothes it is actually just a minor complication. It is simply impossible to prepare for mosquitoes.

One of the interesting points on the route is Lake Teusajaure. Respectively, it is about overcoming it, which is quite unique. Three boats commute along the water, which travellers can rent to cross the lake. The rule is actually one and quite simple, at least one ship must always remain on each shore, thus guaranteeing the flow of "traffic". Unfortunately, when our small group arrived, all three boats were on the other side of the lake. Hmmmm.

Fortunately, there is also a motor boat that took us for a few euros. But it didn't work out for us, and when we were on the opposite side, we took two rowboats, transported them to the other bank, and then returned in one. There are two left on our shore and one on the other waiting for tomorrow's trackers. A little something for a good feeling.

Our journey ended at the cottage Vakkotavare Fjällstuga situated by the road leading back to civilisation. It was sad to say goodbye to Kunslegen, but a swim in the icy Luleälven River got rid of most of the dirt and all we had to do was get back on the train. We were about 100 kilometres away from the train, the bus didn't leave until morning, so we had to stick our thumb out and hitch. The first car passing by stopped and we were on our way to Boden train station. This country is simply divine.