Holiday? What? Well, probably yes, finally some holiday, although it turned into more of a training session…
The plan was to go to Livigno for a week and end with the Nationalpark Bike Marathon in Switzerland, and it was more or less respected. It became clear that it would not be a holiday as such on the very first day when we arrived in the Italian Prad am Stilfser Joch after 3 hours of sleep (as travelling on roads at night is most comfortable). We left our mobile guest house at the end of the village and got changed into our sports clothes. Everyone was wearing cycling jerseys and shoes and took out their bikes. I only had my VAI vest and IRAZU shorts on, but, on the other hand, I put on cross-country ski boots and pulled out my roller skis and poles; the destination was only 25 km away but nearly 2 km of these were uphill; an endless uphill ride… We were going to Passo dello Stelvio (2 758 m above sea level). In the end it was 3 hours of hard work on roller skis. I really liked the first two hours and the countdown of curves was even faster than I had expected, but then the blisters on my heels started to hurt. The pain shot into my calves with each stronger push. "Just 10 curves to go, I am nearly there," I said to myself. But then I looked at the average speed on my watch and it said "6.5 km/h" and the road signs showed "6 km to go". "That's stupid, such a short section cannot take me another hour," I said to myself. But physics knows no mercy, it really took an hour… However, I arrived just a little bit behind our cyclists (one had gone a bit faster and when he had reached the top, he turned, went down for the car and picked up the rest of us). 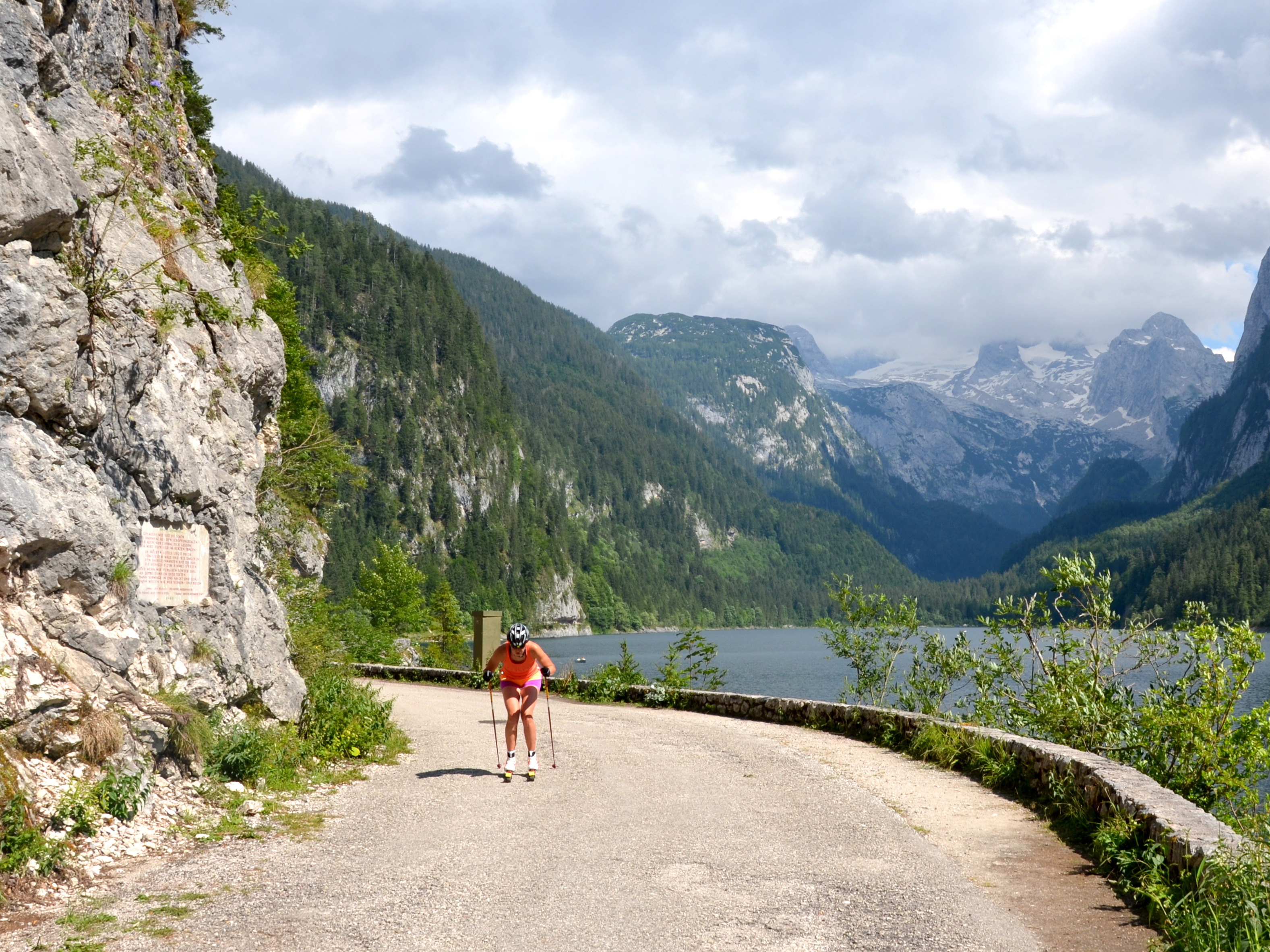 It was overcast up there and it looked like rain. When we had been setting off, I had had to choose whether to take the AIRRUNNER, or my woollen JAGER in my bidon with drink. Eventually JAGER had won and it was really the right choice - I needed something warm at the top and the wind-proof jacket wouldn't give me much warmth.
On our way to Livigno we stopped for a bath in a thermal lake by Bormio to warm up and regenerate our bodies and in the evening, we arrived in Livigno.
As the forecast promised the best weather on the first day of our stay in Livigno, we changed our free sports plan a little and set out for the highest point reachable by bike near Livigno - Monte della Rezze (2,858 m asl), so there was almost an exact vertical kilometre ahead of us. The uphill ride was painful but we were rewarded by picturesque views of Stelvio on one side and Bernin on the other, which compensated for all the toil. Moreover, the trail above was really playful and there was a downhill trail ahead of us. 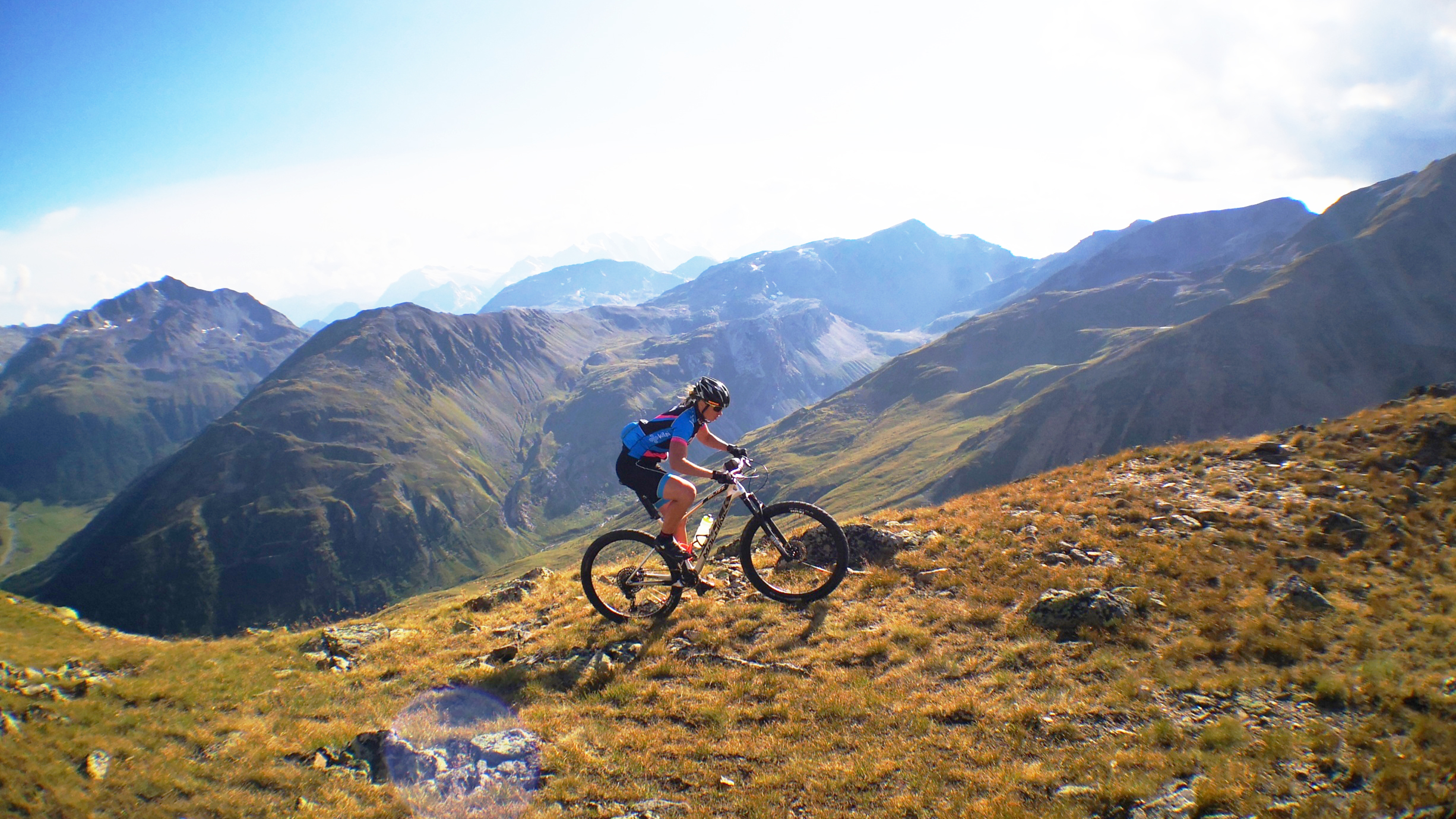 In the next two days we just had to take advantage of the trail on the slopes of the two eight? thousand-meter-high Monte della Neve and Monte Sponda, which took us to the terminal station of the cable car servicing the Mottolin bike park. We had an Italian coffee and strudel in the local restaurant and continued on the trails. There was a pretty steep downhill ride from time to time, so my brakes smelled a bit, but that sometimes happens. The weather was still nice, so I needed only short sleeves on my bike (ORETI or team CORRIDOR) and short pants (RIDER). I had also packed my RAINAR jacket for the downhill ride. 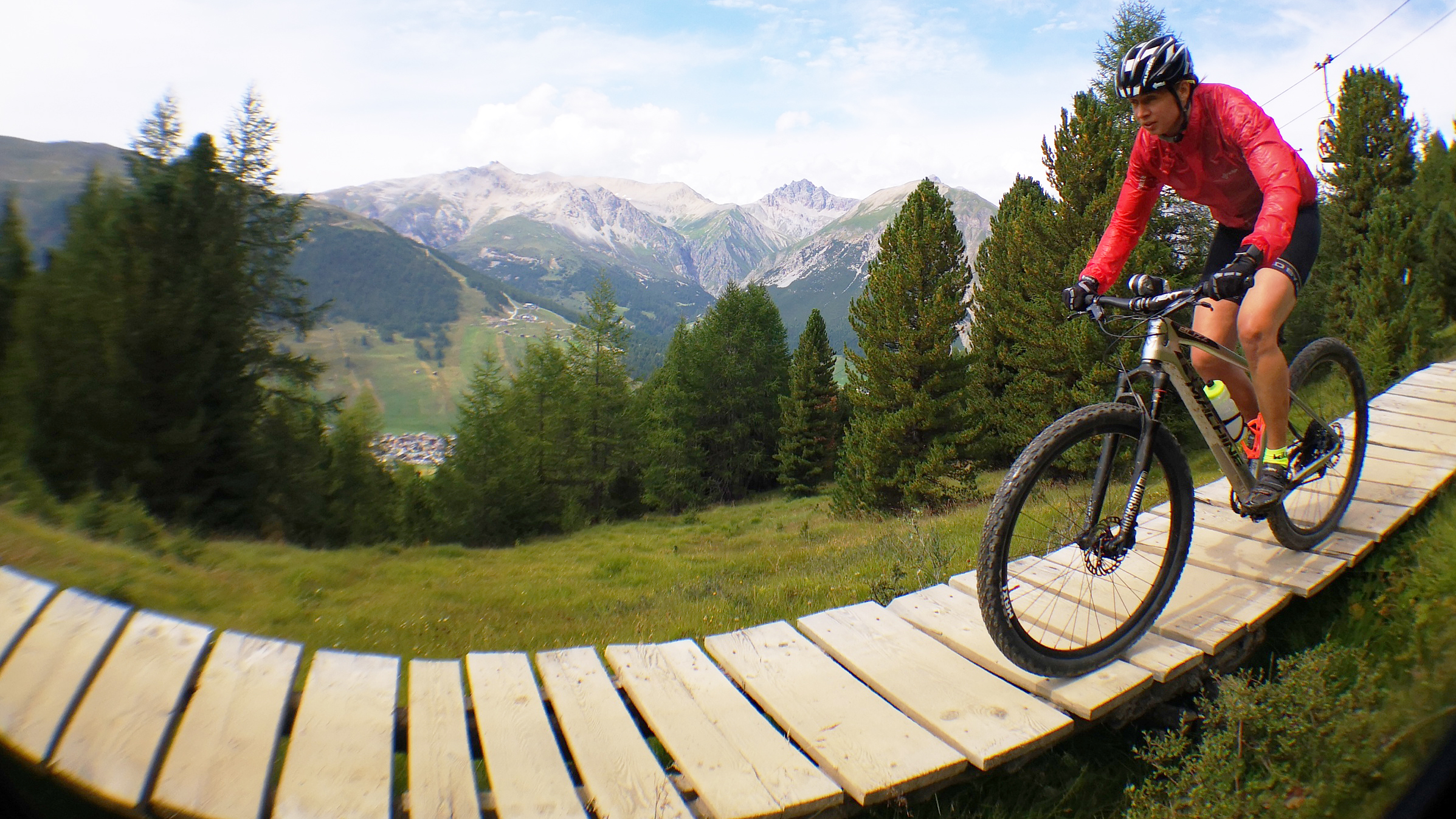 As part of a light and relaxing biker warm-up ride before the Nationalpark Bike-Marathon, I took a roller-ski trip to Passo dell'Eira (2,220 meters above sea level), changed into my bike clothes and set off to the cross on La Pare (2,390 meters above sea level). The hill is by far not the highest in the area, but it rises above the lake and offers a great view of the whole Livigno valley. It was cold, so RAPITA proved a great help, as the low-lying clouds brought rain as well.
The next morning (Friday), we were moving to Scuol, Switzerland, where the Nationalpark Bike-Marathon (137 km / 3,800 m superelevation) was scheduled to start on Saturday, so jogging around Lake Livigno in the morning sunshine was simply a must. In the evening, we had a light warm-up ride along the starting section of the race into the canyon of the Clemgia river, which had turned from a small river into a wide uncompromising course after the rains. 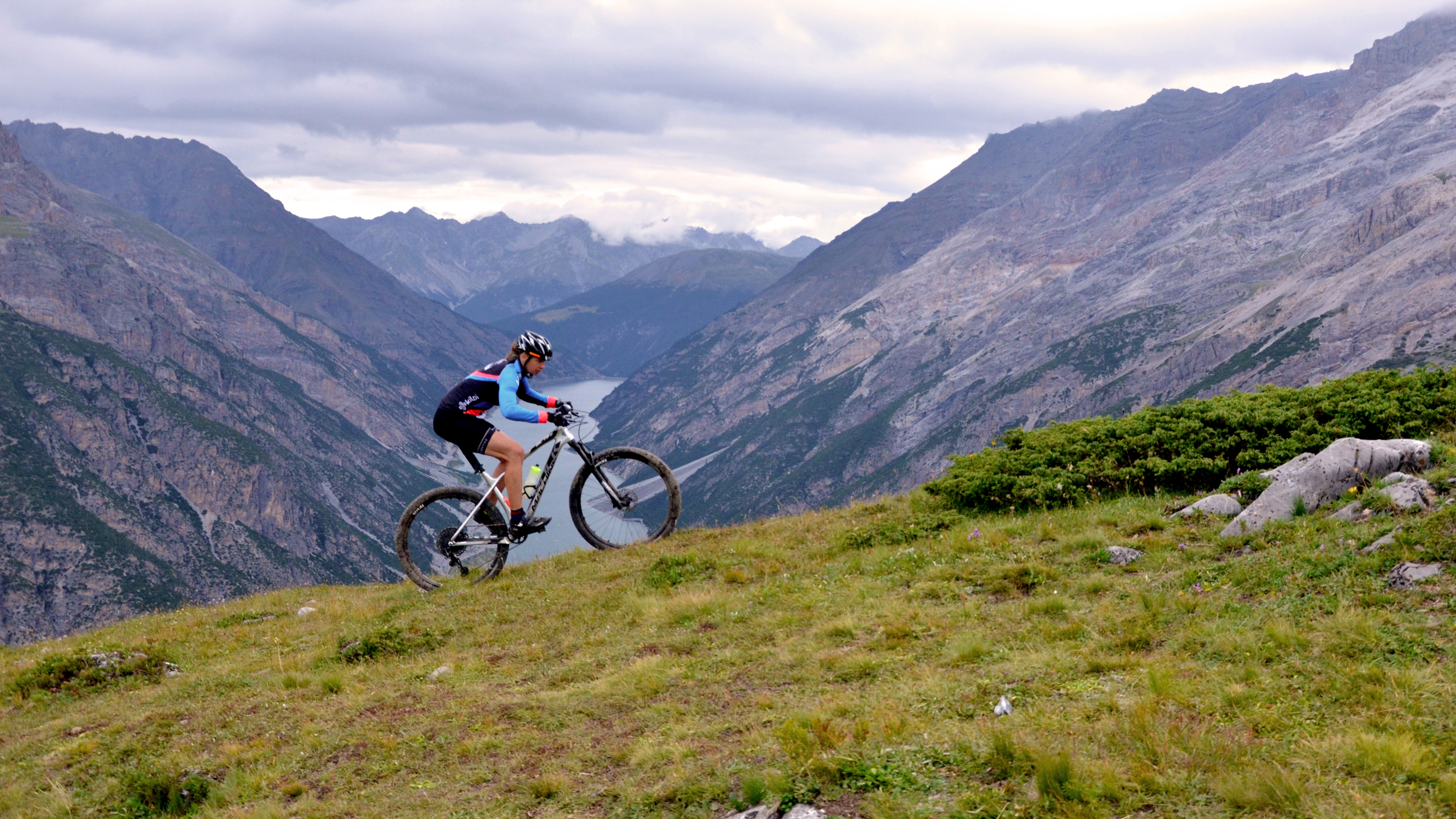 I was going to act as a support at the highest point of the race. However, the agreed logistics failed in the morning before the start - fortunately the boys did not rely 100% on support and were self-sufficient, so I had a day off. I spent some time stowing the disorderly clothes and then I took my running shoes, IRAZU shorts, MERIN T-shirt and trekking poles and set off over a 2 793 m high Piz Clünas to the 3 068m Piz Minschun on foot. Finally, no lazy riding on a bike. It was a bit windy on the top so the AIRRUNNER jacket proved to be an ideal helper. I took a few photos and hurried down - that was obviously more difficult than the way up. Finally, the trip took me about 5 hours and it was 25 km long with the superelevation of 2,000 m. 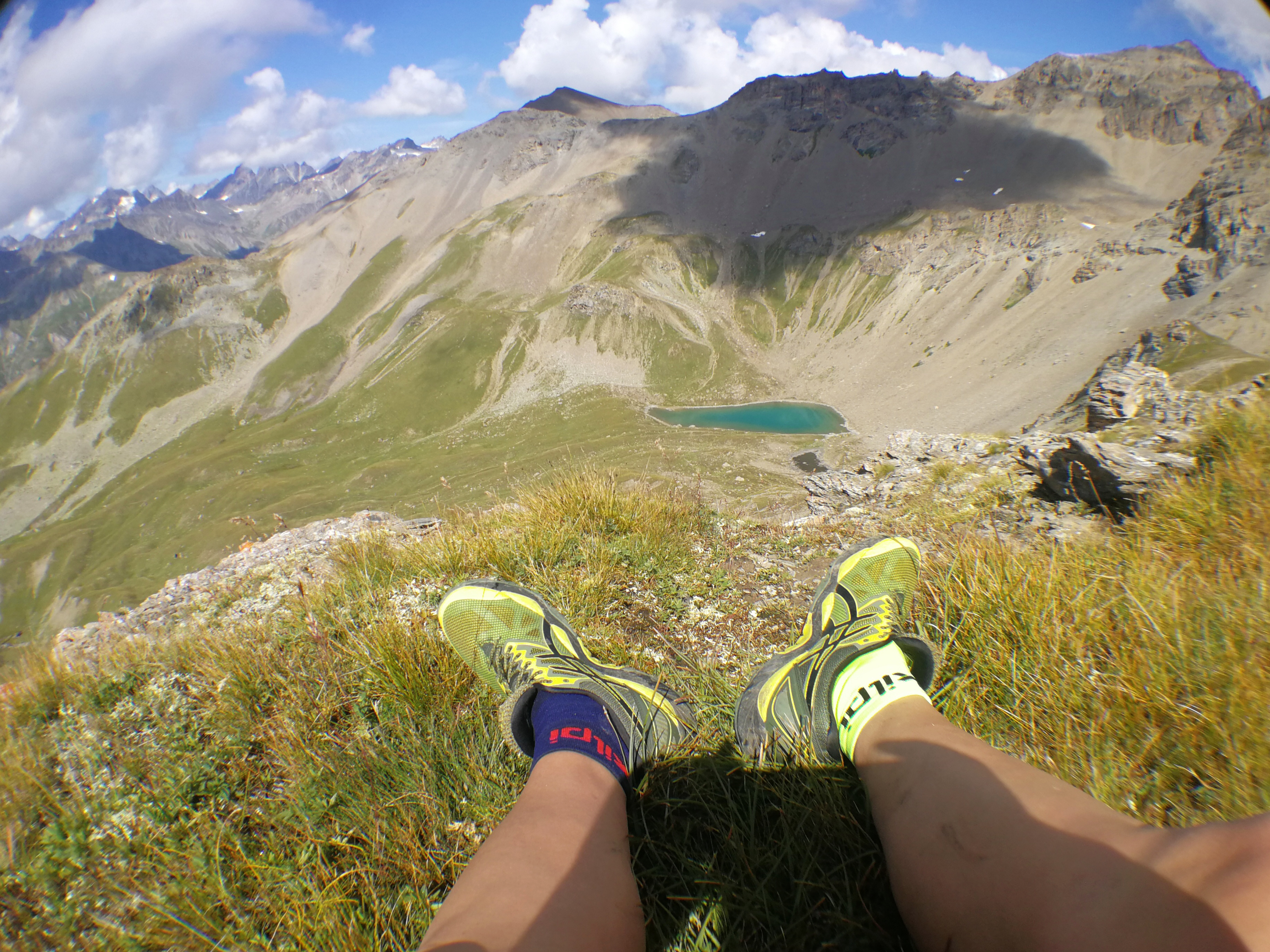