1000 MILES OF BIKEPACKING ADVENTURE AROUND THE CZECH REPUBLIC AND SLOVAKIA

Two months after successfully finishing the Iberica-Traversa race I was standing at the starting line of a bikepacking race again. This time it was the 9th year of 1000 Miles Adventure. It is a Czech bikepacking classic, with the route leading from the east of Slovakia to the west of Bohemia (in even years the race goes in the opposite direction) across all the Tatras / Fatras in Slovakia and all the mountain ranges forming the northern border of the Czech Republic. You ride 1,650 km with the superelevation of 40,000 m. 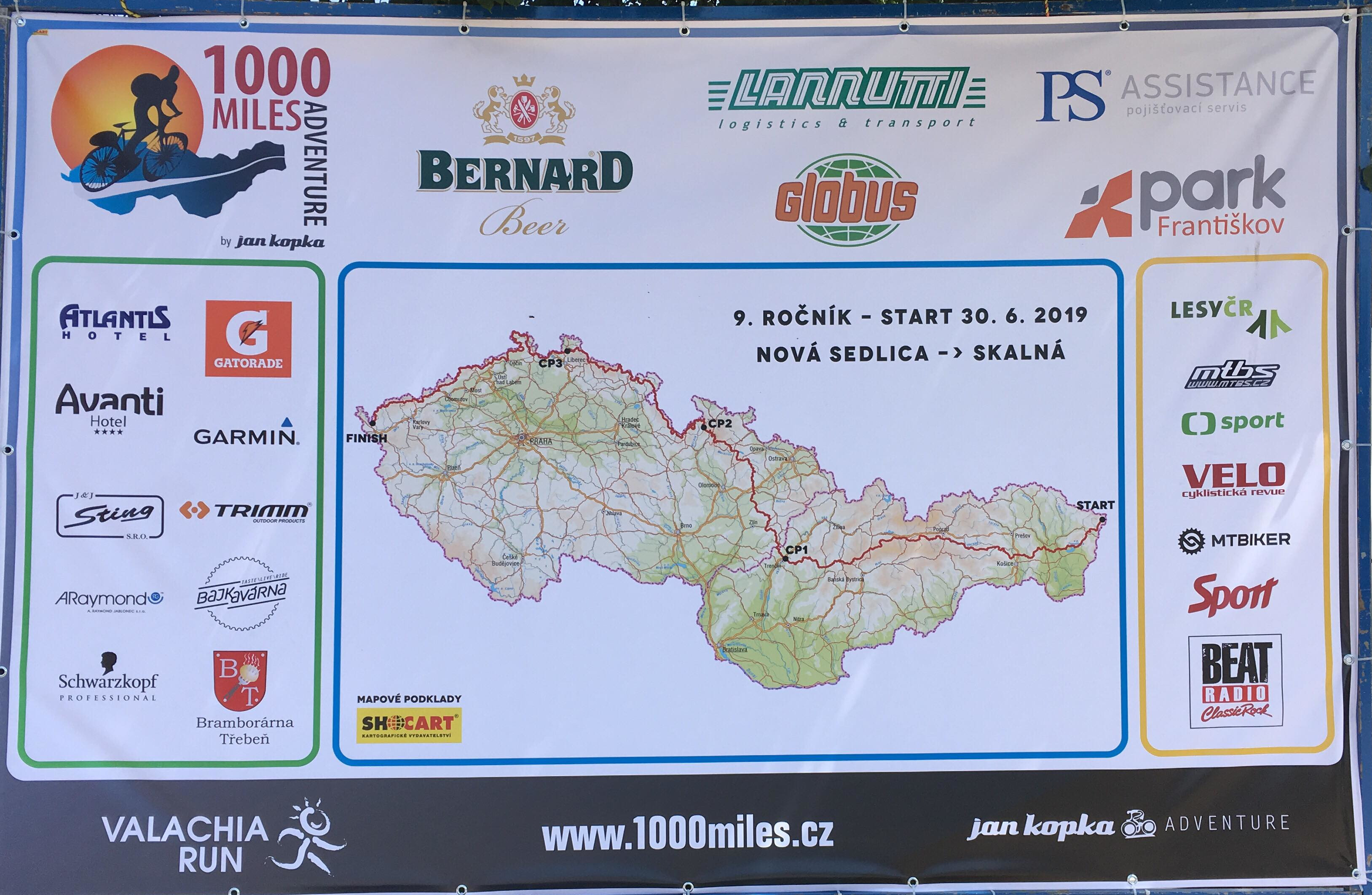 When I took part for the first time in 2017, I finished second in 8 days and 7 hours behind Jirka Kaspar, who was the first to finish the race under 8 days and set the track record to 7d 20h 51m. This time, however, I was not sure about my physical condition, whether my body had rested enough after Iberica, and my head had not even been set for another enormous load for a long time. My plan at the starting line was to try to set off better than in 2017, but if the body did not feel OK, then I would rather slow down, stop worrying about the result of the race and just enjoy wandering in the Czech and Slovak homeland. 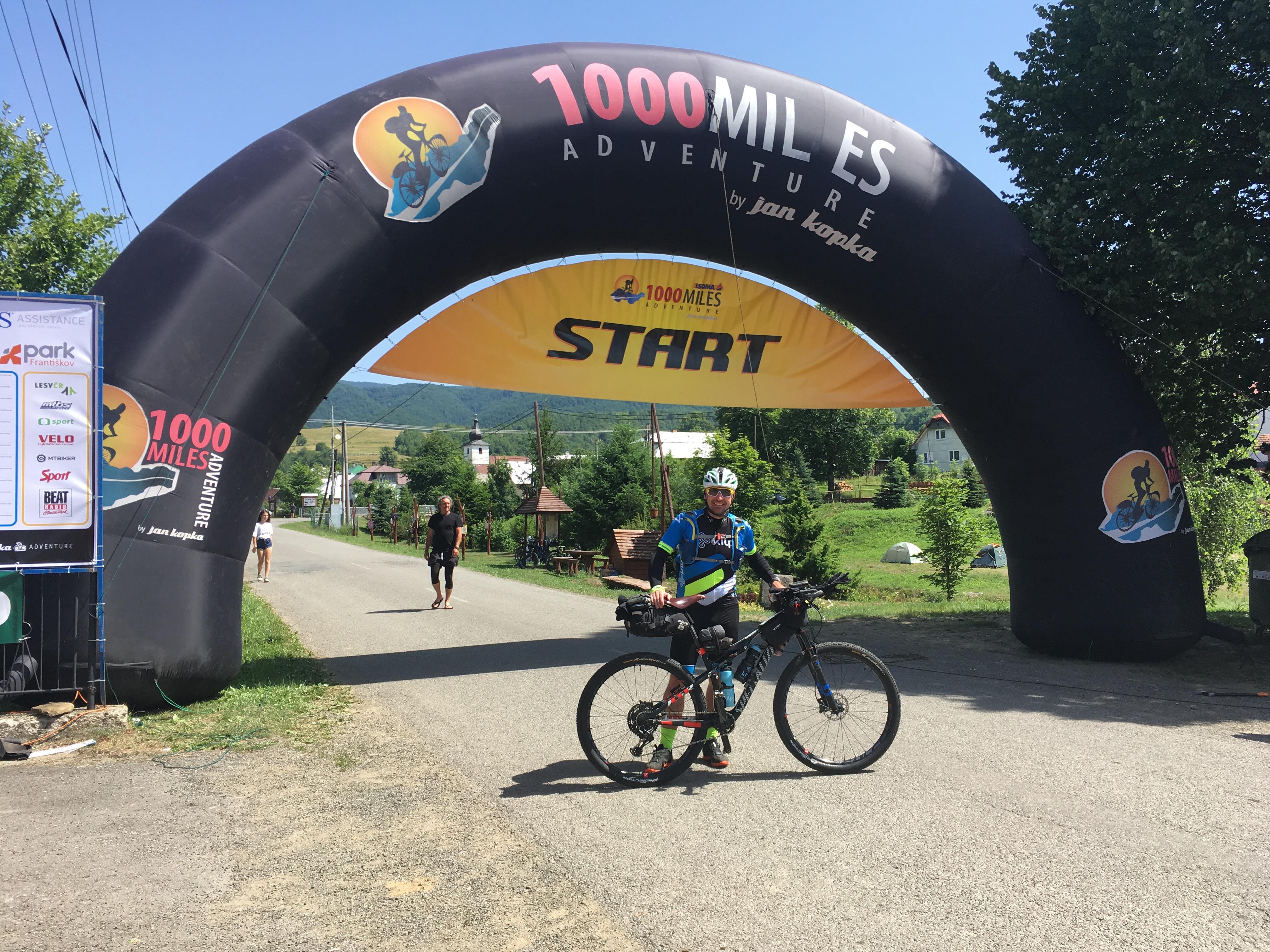 The competition at the start was amazing, such a band of well-balanced racers had probably never met before, so it was a tough fight straight from the starting line. The first evening I arrived at the Hrešná chalet near Košice on the 170th km as the leading couple of racers, with the legend of Czech bikepacking and the founder of the race, Honza Kopka, three hours earlier than last year. It was a clear signal that the race would be fast this year. We could not go any further, because we were stopped by night ban (so-called bear zone) until 6:00 AM. The next day I tried to ride solo and save my strength because it was not possible to go further than to the foot of the Low Tatras, where we had to stop in front of the NP again before entering other bear zones. It was extremely hot (37 °C), so I rode calmly, just as much, as I had to in order not to get too tired and to get as far as I needed. I left the leading group because the boys seemed to be racing unnecessarily when there was nowhere further to go. The whole day was great with amazing views of the Slovak mountains. Only in the evening a severe mountain storm, including hailstorm, started. As the hail had stopped, I continued further in the rain to the site of the planned bivouac. Just before the end of my day trip, the park ranger drove me away from my planned stay over the night saying that a bear was grazing about 50 meters ahead of me on the route. Respect for authority and self-preservation eventually prevailed over the natural curiosity of seeing a bear in the wild, so I obeyed. 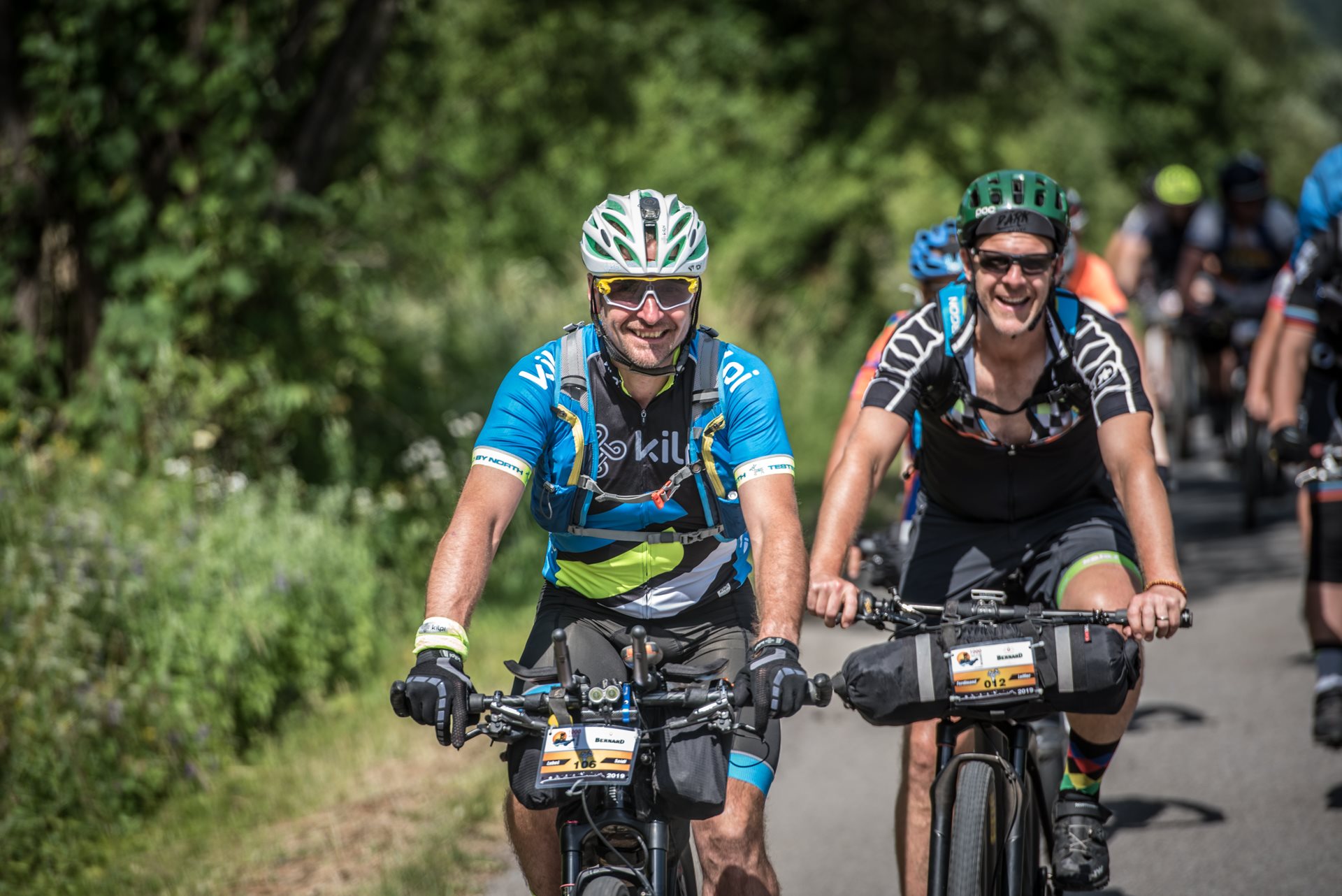 The third day is usually the key one on the Miles. If everything goes well, you can ride as far as the end of the Slovak part of the track and then no one is constrained by bear bans and the race actually definitely starts. But it is also the day with the greatest superelevation. You have to cross 3 gaps in the Low Tatras, Velká Fatra, Malá Fatra and Strážovské Hills between 6:00 AM and 9:00 PM. The Low Tatras went very well, but I started having difficulties as I was climbing to the highest point of the race, Križná (1,570 m above sea level) in Velká Fatra, and I continued to suffer in the Malá Fatra and until the Strážovské Hills. I found myself in the final bear zone in the Strážovské Hills just at the golden hour before sunset. Great views and amazing landscape poured new life in my veins again and I had a great time riding. After that followed neck-breaking descents to the first checkpoint near Trenčín (553 km), which I reached on the fourth place, just behind the leading trio. Just behind the checkpoint, there is a treacherous ford across the Váh river, where you can plunge neck-deep into the water if you do not know where to wade. That is why I had gone to this ford a fortnight before the race and walked there in swimming trunks for an hour in order to find out where to cross the river. In the race, I just rolled my shorts up to the middle of my thighs and 5 minutes later I was racing down the track again. I pushed myself a bit further over the border ridge of the Bílé Karpaty into the first villages on the Czech part of the route and after about 230 km in a day, I bivouacked under the protection of the God, on the porch of the chapel in the village square. 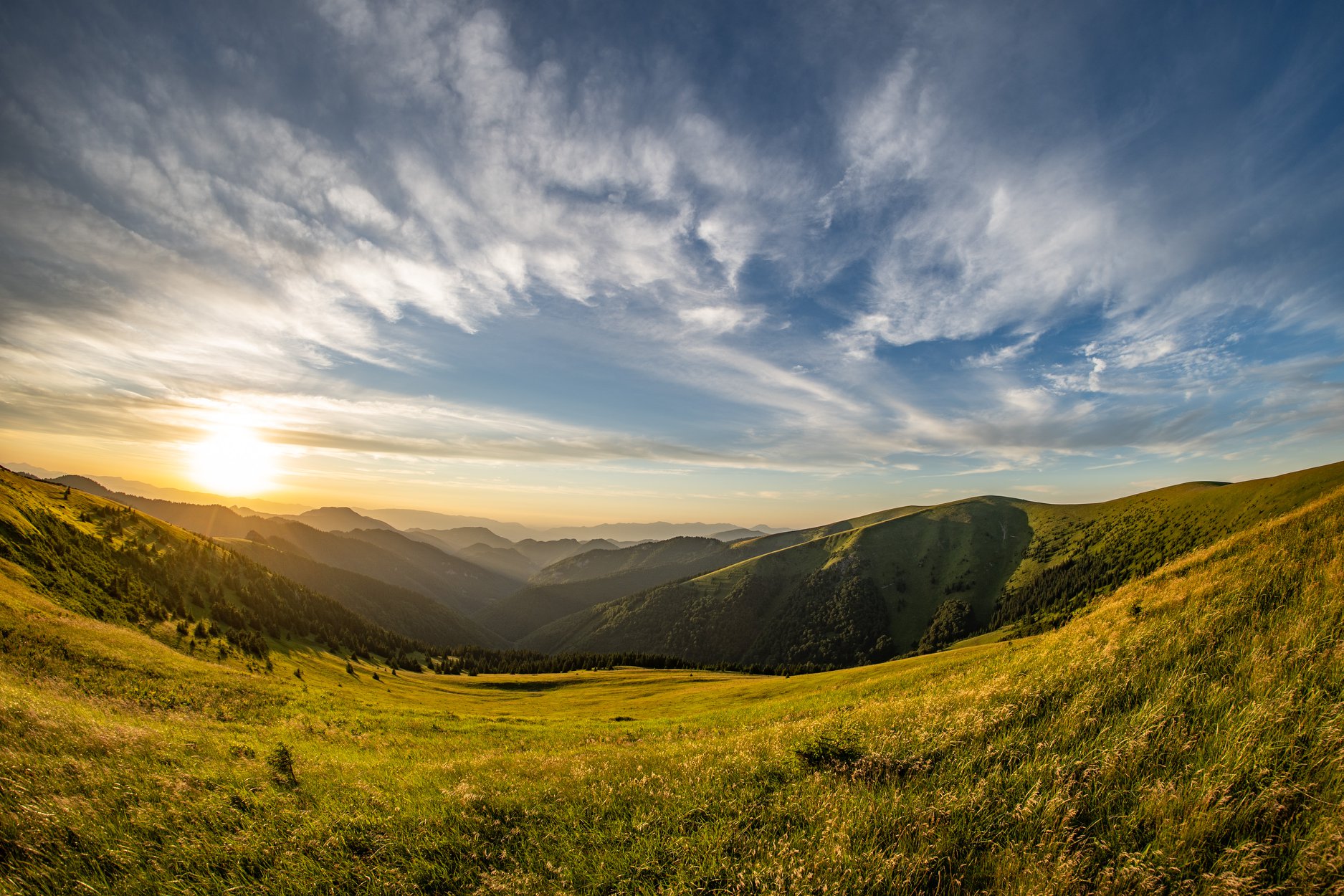 On the fourth day, it was necessary to cross as big a part of Moravia as possible. There were the Vizovické Hills, the Hostýnské Hills my home Oderské Hills, and in the evening the Nízký Jeseník and the foothills of the Jeseníky ahead of me. I met Martin Palásek and Petr Novák on the route from time to time. Milan Hanyk was already far ahead. He had bivouacked nearby but then he had just disappeared in the distance. That part of the route was easier for me because I had often trained there, so I felt fine all day and actually enjoyed the ride.
In the evening, I and Petr Novák bivouacked at the foot of the Jeseníky Mountains in a tourist shelter on Mravencovka not far from Karlov. 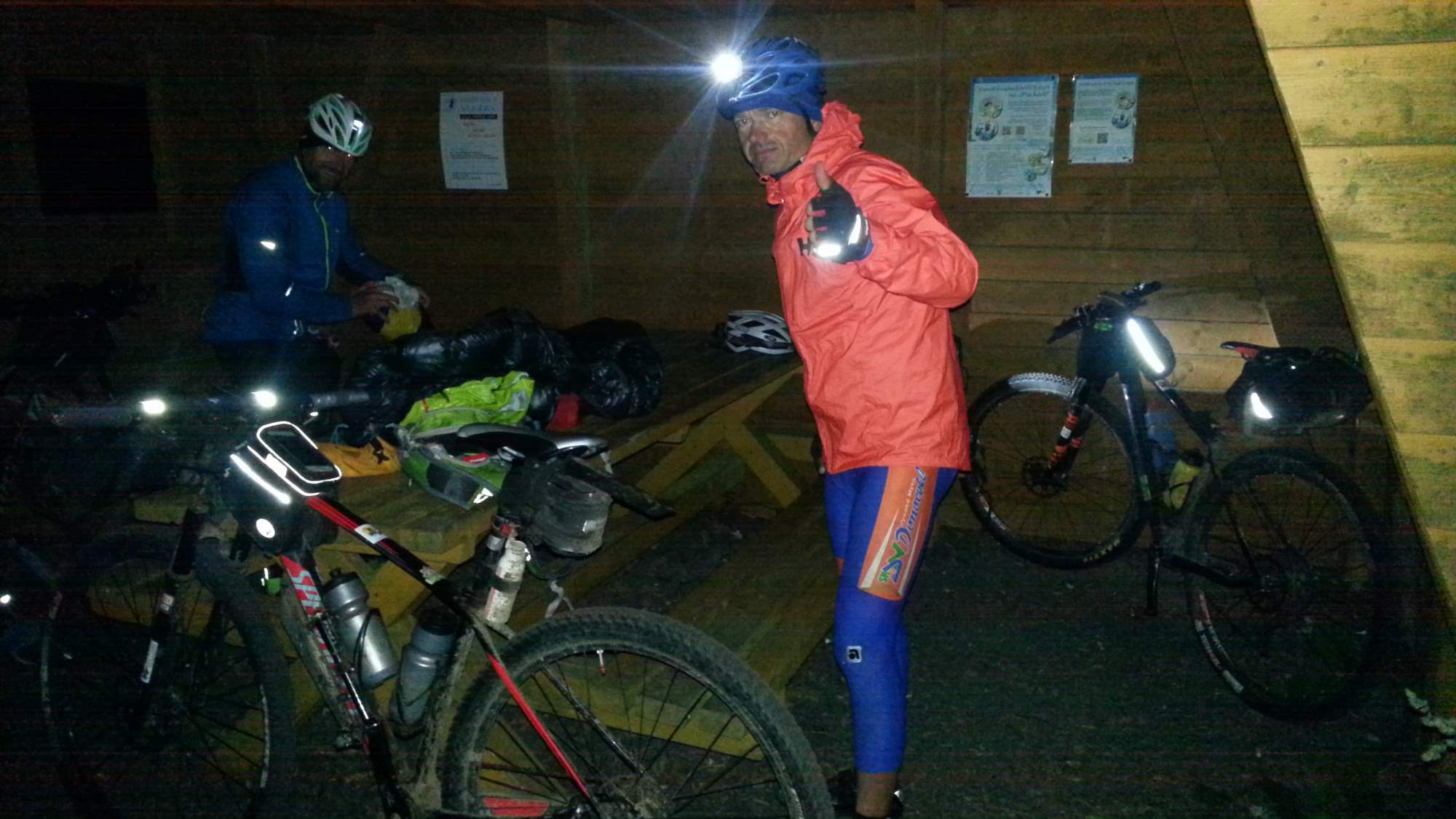 On the fifth day I was trying to make some lead on Peter all day, but every time I stopped to have a snack, he caught up with me again. On the other hand, Martin Palásek had some problems after the day before and had fallen about 2.5 hours behind us. In the morning I crossed the Jeseníky Mountains, followed by the Rychlebské Hory, the Kralický Sněžník and in the evening I drove through most of the Orlické Mountains and bivouacked in the forest under Velká Deštná. Probably the most beautiful bivouac this year. After the Orlické Mountains followed the crossing of the Polish Stolové Hory (Table Mountains) National Park and the technical sections of the Broumovské stěny (Broumov Rocks) and then the Adršpach-Teplice Rocks, where the iconic MTB Trilogy stage race was just taking place. I had a high-five with my mate, Tom Kašný who was racing there when a pack of racers stormed towards me just after the start (on their first hill of the day). After leaving Adrspach, the most difficult section of the Czech part of the trail - the Krkonoše (Giant Mountains) National Park came with the steep climb to Pomezní Boudy, Výrovka, Medvědín, Dvoračky and God knows what else… Sometime around midday, I met Petr again and we agreed to cooperate instead of trying to beat each other. It was actually an ideal moment because Petr was at home in the Giant Mountains, and so I could profit from his knowledge of the track. In the end, we bivouacked somewhere on the ridge above Harrachov. 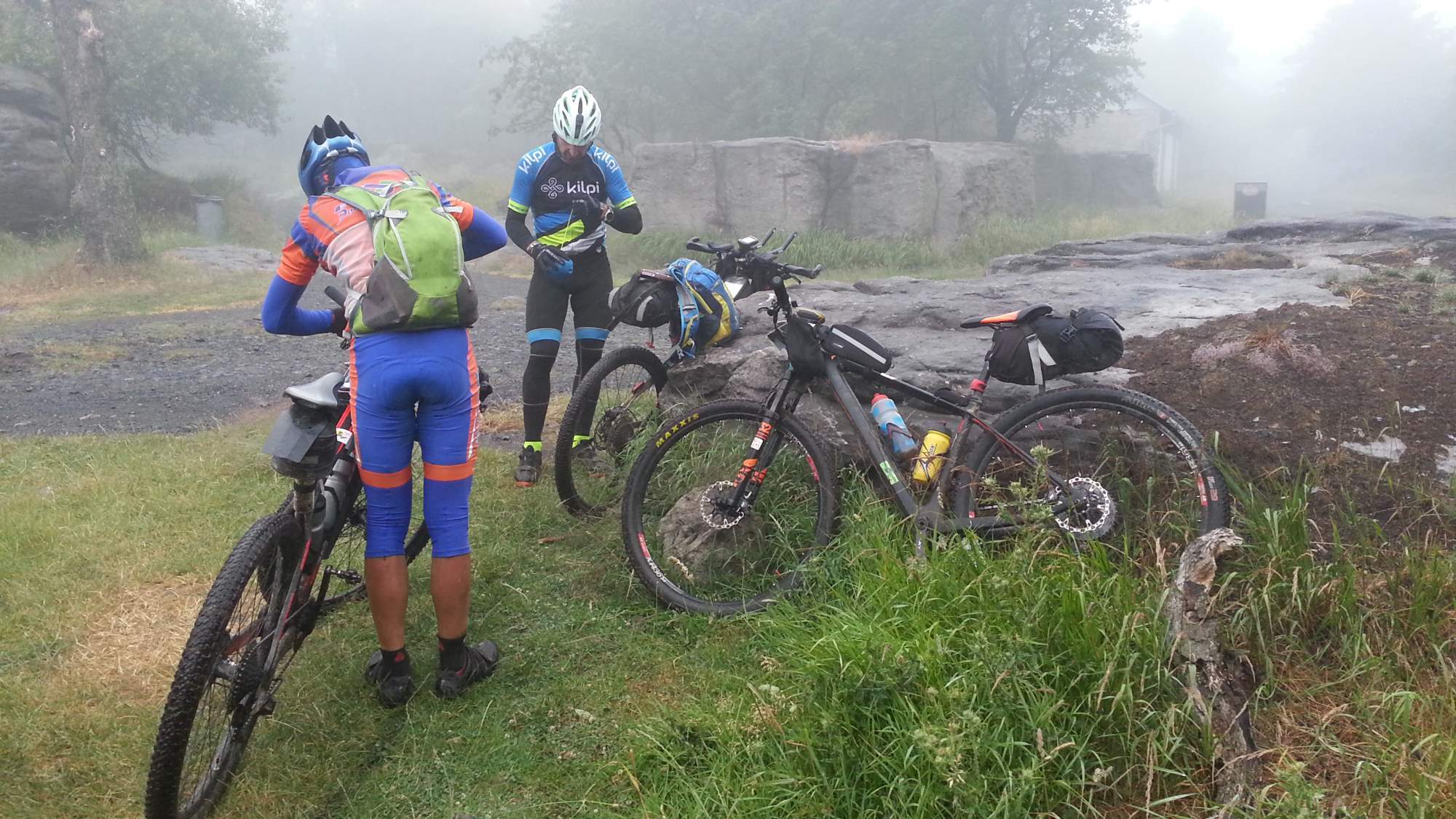 We were not very lucky in the morning of the seventh day of the race. At first, Peter fell on gravel in an otherwise relatively easy curve, and as he was shaken, he had two more falls on the dew-moist grass due to inattention. When riding downhill to Jakuszyce, Poland, I, for a change, hit a stone with my front wheel, launching it towards my rear wheel where it pierced the tire and made quite a lot of mess: a puncture, a spike and a bent derailleur. I somehow fixed it on the spot, but I lost two lightest gears, which was a big loss. There were just over 500 km to the finish line and the defect meant that I would have to walk up the hills that I would normally be able to manage on my bike. The rest of the day was perfect. We crossed the Jizerské Mountains with a downhill ride along the singletracks below Smrk and continued across my favourite Lusatian Mountains. I missed them in my geography lessons, but they are just great for biking. Behind the Lusatian Mountains, the route took us to the Šluknovský Headland, which we crossed along the border across the northernmost point of the Czech Republic, Nordkap, which is a dreaded 15 km section over endless tree roots. Behind Nordkap we rode into to the Českosaské Švýcarsko (Bohemian and Saxon Switzerland) National Park, through which we continued until midnight, and bivouacked in Jetřichovice in a five-star pavilion, which was even equipped with a water supply. 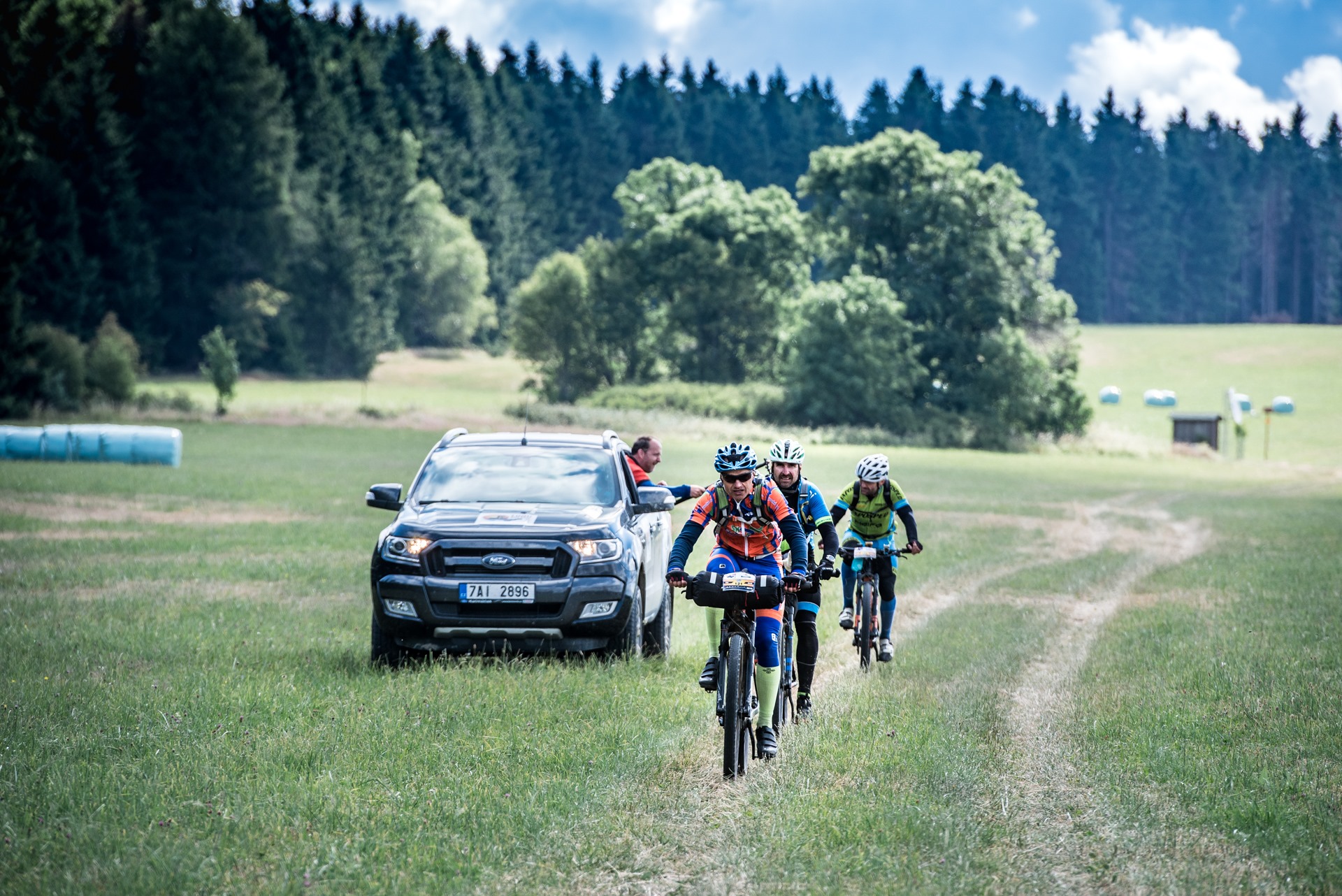 On the eighth morning, we got up into an unpleasant drizzle. We had to cross the “only” mountain range, the Ore Mountains, but there were still unbelievable 270+ km ahead of us. In the morning we met Martin Palásek, who had ridden longer into the night and bivouacked only some 50 m from us. Martin was glad he was no longer alone and we had another engine to pull our mile train. We no longer had to rush, because Milan was already nearing the finish line and he finally set a new track record (6d 23h 42m) and there was an estimated 5-to-7-hour gap behind us. We, therefore, decided to slow down our pace a bit and enjoy the route. It was still not a walk in the park and the Ore Mountains proved that they're really worthy of their name. Just before the climb to Klínovec mountain, I had a severe sleep crisis at night, so we decided to have one more three-hour sleep session and reach the finish line in the morning. 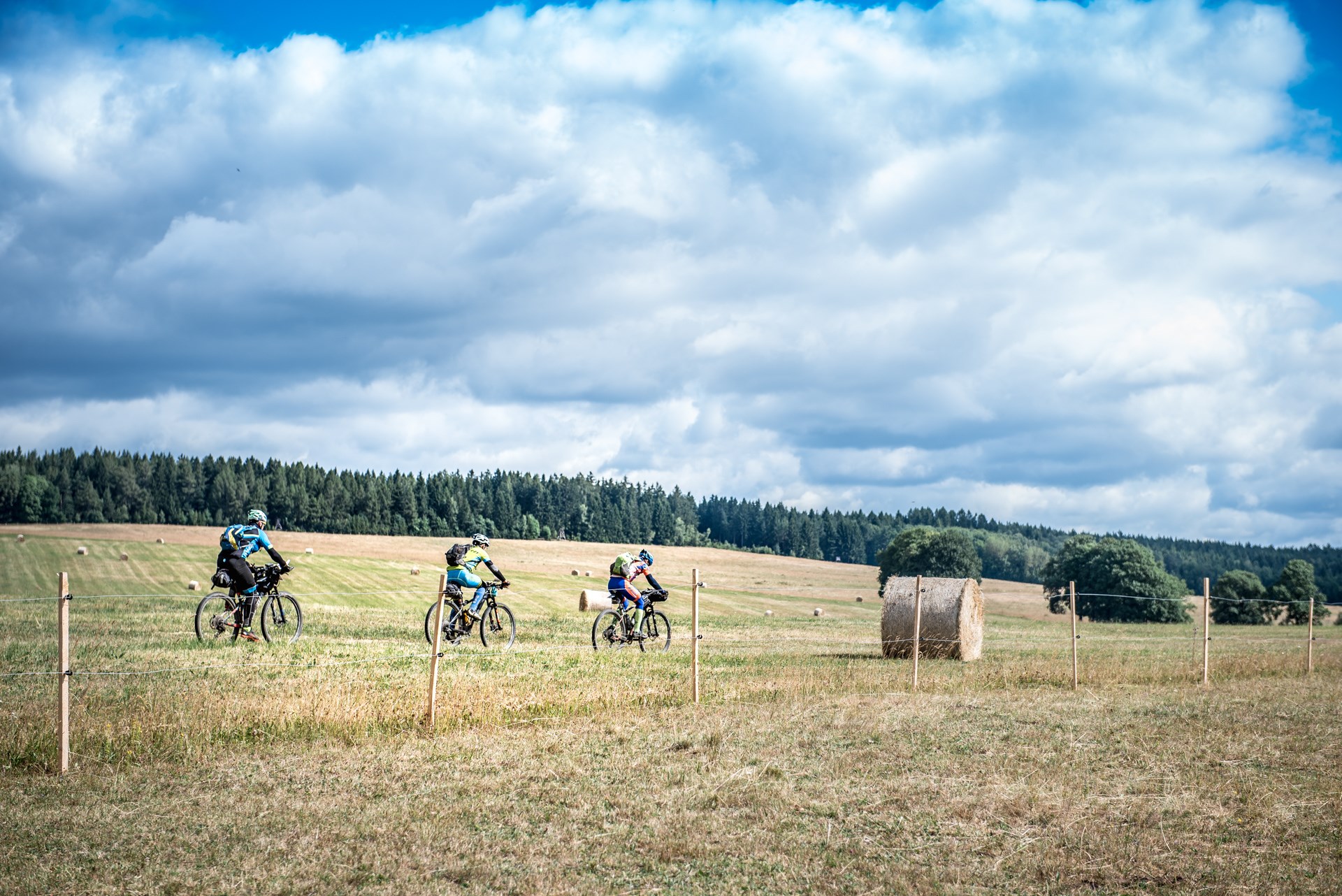 The last day we woke up to an incredibly frosty morning. Although the initial climb to Klínovec kept us warm, we froze again in the following descent. We regained our thermal comfort only when a fan of the race invited us for tea and breakfast to his cottage which was lying directly on the route. Strengthened and warmed up back to the operating temperature, we cut the last tens of kilometres to the finish line. When the media team of the organizers appeared, we knew we had done it. We raced for the sake of appearances for the cameras and then we crossed the finish line together on the shared 2nd-4th place at the time of 7d 20h 11m, which would have been a new track record if it had not been for Milan's fantastic performance. 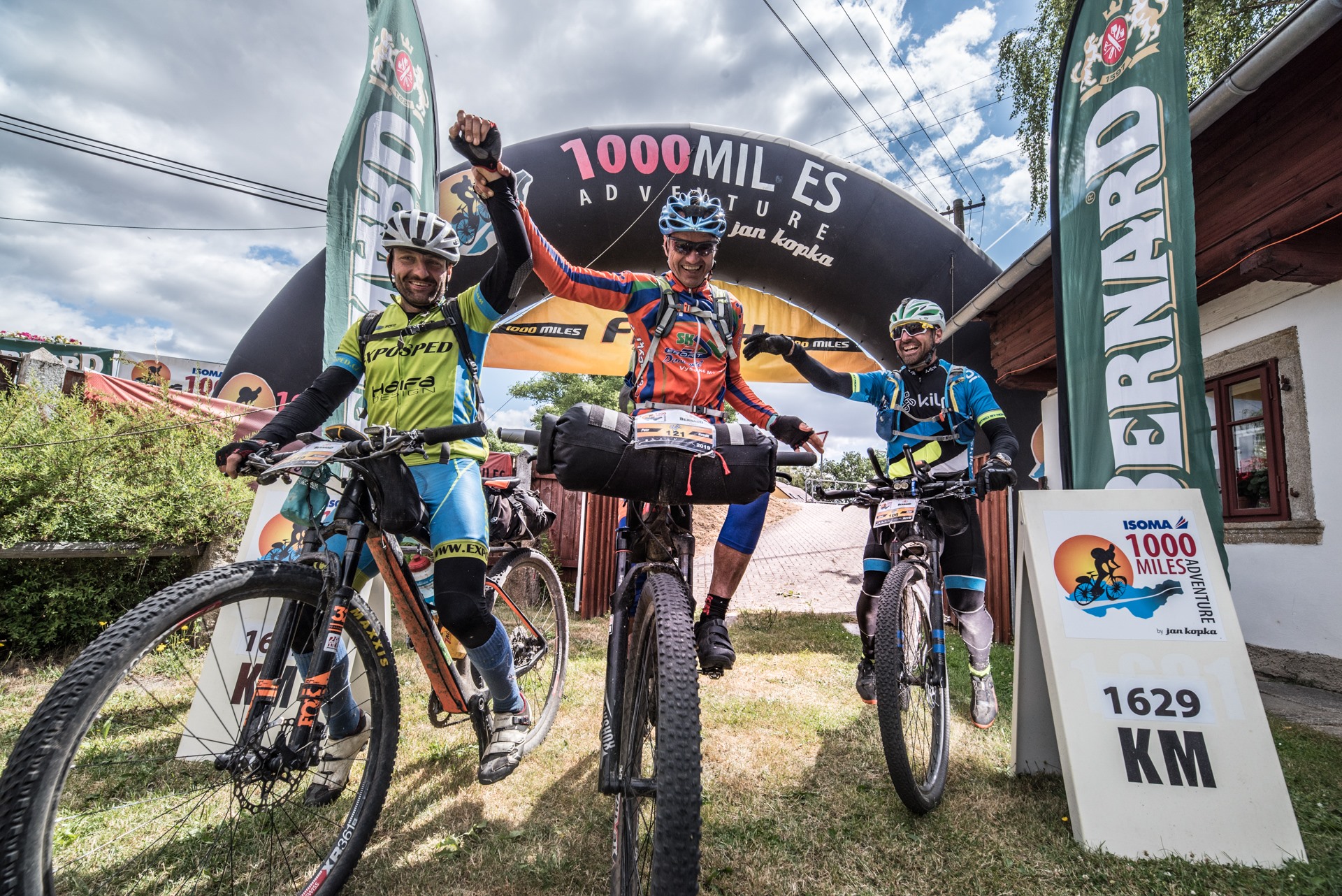 I am satisfied, for I was able to ride two such races within this year's season and have only one (though tough) lack-of-sleep crisis and one technical issue. But far more important to me is new friendship with Petr and Martin, as well as countless experiences and stories from racing.